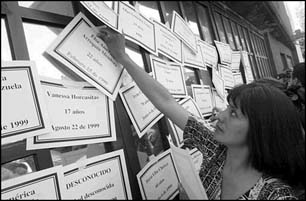 Laura Martinez posts names of women who have
been killed in the border town of Ciudad Juárez
as part of a protest that took place in Mexico City
on February 25, 2003.

As you go in to watch Mexican director Antonio Urrutias' film “I Murder Seriously” (“Serious Killer”), we ask you to think of the ongoing mass killings of women in the U.S.-Mexico border city of Juárez, Mexico. In the last ten years, over 500 women, most between the ages of 12-25, have disappeared from this district.

Some 200 bodies have been found. The women were tortured, raped and ultimately murdered. Most were workers from sweatshop textile factories, the majority owned by U.S. corporations. Others had turned to prostitution in an effort to escape the poverty that had ruined their young lives. As lower-class women, they were viewed as so unimportant and disposable that police have had to be forced to investigate.

These brutal homicides have sparked protest in Mexico and internationally, which Urrutias must have known about. We find the movie's depiction of the fictional victims dying of “lethally blissful orgasms” to be particularly offensive given the sexual and physical violence the real women suffered.

To learn more about this issue, please see: