Onward to a Year of Joyous Rebellion 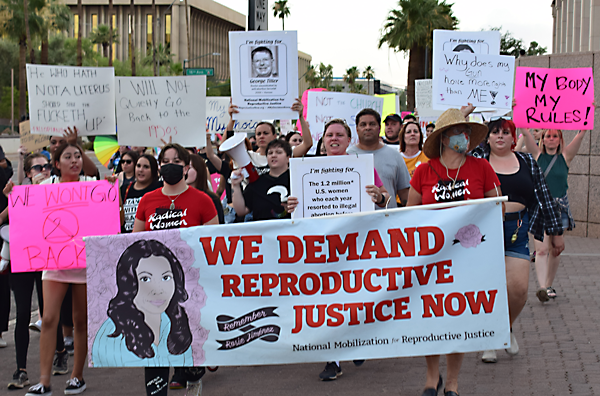 Raise your glass to the New Year -- one that will undoubtedly follow in the defiant footsteps of 2022!

The outgoing year was one of ups and downs in the United States and across the globe. But regardless of the hits, people of all genders expressed their desire for change. From abortion to wages, job safety, human rights, and more, working people – often led by women, people of color and students – organized and spoke out.

Let us toast the fearless women in Iran and Afghanistan who face imprisonment and death to defy misogynist laws and state repression. Spurred by the police murder of 22-year-old Jina Mahsa Amini, an Iranian Kurd, her countrypeople in every land have protested and raised the call for revolution. In Afghanistan, the Spontaneous Movement of Afghan Women is defending female personhood against the vicious Taliban. Updates on their courageous actions can be found at radicalwomen.org.

We also stand with the Palestinians, Ukrainians, and Russian peace activists who are fighting back against war and occupation.

A glass must also be raised to the hundreds of thousands of people who roared their outrage – in the United States, Australia, and beyond – when Roe v. Wade was overturned. Radical Women is proud to have initiated the National Mobilization for Reproductive Justice, which put out the earliest calls for day-of-decision protests. Labor militants with the Mobilization are hatching plans to push their unions to take up this vital fight in 2023. Everyone is invited to come out in the streets again on January 21-22 to say “Forward, Not Back: Free Abortion on Demand! No Forced Sterilization!” See the calendar at ReproJusticeNow.org for details.

A salute to workers across the United States and beyond -- public employees, transit and train operators, warehouse workers, nurses, educators, and baristas -- who walked the strike line for fair contracts and union representation. Cheers for LGBTQ+ youth who demand the right to be out and proud. Grateful acknowledgement to Indigenous people who lead the battle against destruction of the environment. And r-e-s-p-e-c-t to Black militants, with impressive leadership of women, queers and youth, who struggle against racism and police brutality.

The one-two punch of socialist feminism and international­ism is key to the global change so desperately needed. The world’s feminists, leftists, labor militants, water warriors, civil rights defenders and LGBTQ+ activists can find hope and sustenance from each other’s courageous efforts. Let us resolve to greet the new year with tenacity and solidarity with freedom fighters around the globe!

Onward to 2023, and another year of rebellion and revolution!