Moms on the Front Lines: Stewards of resistance in Colombia 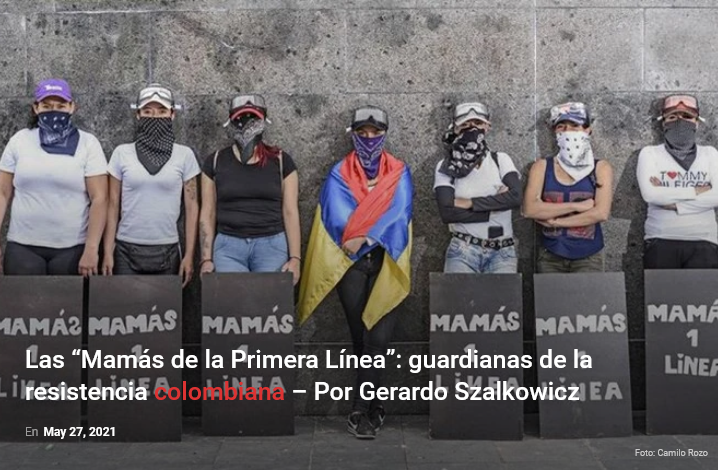 Until a few weeks ago, they were typical women who spent their days solving household chores, wandering between precarious jobs, raising their children alone, juggling to achieve the feat of not starving. Anonymous women. Mothers, young people, heads of households, poor people. Fighting moms. Of the hundreds like them that live in the popular neighborhoods of southwestern Bogota, of the thousands that inhabit the Colombian territory, of the millions that populate Latin America. But the social outbreak summoned them to the streets and their vast experience in care work (unpaid) was replicated outside the home and transformed into a collective identity: today they are the "Moms on the Front Line."

Johanna is 36 years old, with a 12-year-old daughter and a son who is 4. In a telephone interview, she tells us the germ of the group: “We are ordinary mothers, all heads of the family, who got to know each other in the mobilizations. Because women are very exposed to attacks by the police and to rapes, we began to walk in groups, to take care of each other, to be aware of each other, and to accompany other young women to their homes. One day I proposed to them to make some signs that say that we are mothers, as something symbolic, and that is when the idea of ​​forming ourselves as a group arose. We are caring mothers, sisters, neighbors; we are not vandals, we are mothers who come out in defense of life and in defense of the young people who march peacefully and are there resisting. ”

The Portal de Las Américas, in the populous town of Kennedy, is one of the central stations of the TransMilenio, Bogotá's mass transit system. Its enormous site became one of the epicenters of the protests that began on April 28, first against the tax reform and later against the entire Uribe regime. And just as the Plaza Baquedano was renamed the Plaza de la Dignidad in the Chilean revolt, the signs now reflect the pulse of effervescence and its new name, Portal de la Resistencia.

That was where the moms met and decided to put their bodies on the front lines. For that they needed a central element, the shield that helps to hold back the police artillery and give the rest of the protesters a chance to retreat. They searched the rubbish bins but did not find much, so with the little money they could collect they made some conglomerate wood shields, painted them black and inscribed "Mamás 1 Línea", immortalizing that symbol of protection and identification that went viral on social media. The look is completed with the scarves covering their faces (due to the covid, gases and especially for safety), a cap-visor and some protective glasses that some students gave them. 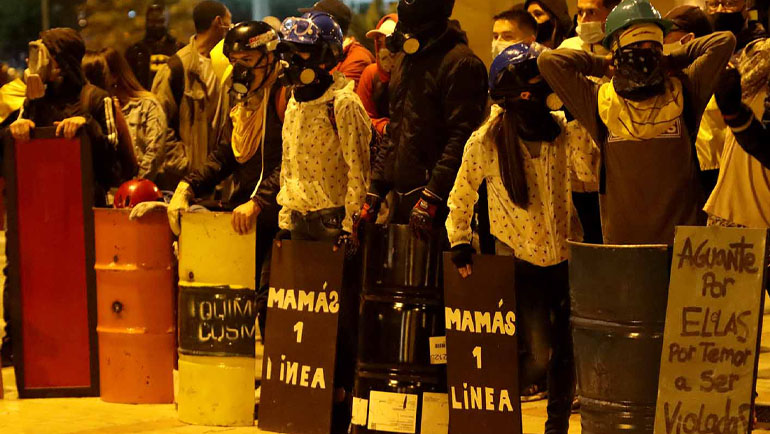 They are just a dozen of the hundreds of people who go daily to the Portal of the Americas to keep the flame of rebellion alive, which continues to burn throughout the country despite the lack of international press. By day, the dynamic is one of peaceful protests and cultural activities, and at night the now classic onslaught of the Mobile Anti-Riot Squad (ESMAD) that has already left a line of more than 40 protesters killed in less than a month. The “Moms of the Front Line” also suffered repression with gases and stun grenades, justified by the Chief of the Bogotá Police, Eliécer Camacho: “Unscrupulous people are using women who have no experience, possibly in confrontational issues, they use elements as shields to face our ESMAD. It is irresponsible.”

Johanna asks to be known only as Johanna. She prefers not to give her last name for safety. "Some of the mothers are already being threatened, and of course the fear is there," she says, and in the story her voice begins to break. “The biggest fear we have is when we kiss and hug our children every day and know that this may be the last hug. It's very hard, it's the hardest part, harder than standing in front of a tank that shoots jets of water and tear gas at you.” It is known that raising your voice in Colombia can cost dearly: so far this year 65 leaders have been assassinated. “In our country, everyone who rebels or protests is ordered to silence. So the fear is there, but we are going to continue resisting because the desire to see a different Colombia, a just Colombia, where we have the right to a dignified life is stronger,” she says.

The underestimation and demonization of the government is complemented by its broad media rearguard. The official Semana magazine went so far as to headline "Frontline mothers, the vandals' new invention to defend themselves against ESMAD." In the article, journalist María Isabel Rueda speaks of the “criminal use of mothers” and compares them with children recruited by armed groups. Johanna clarifies the obvious: "They are not using us as a shield, at no time are they inciting us to anything, it was purely our initiative."

The neoliberalism + pandemic combo is wreaking havoc in Colombia. According to the National Administrative Department of Statistics (DANE), in the last year 3.5 million people fell into poverty, which rose to 42.5%, and unemployment increased five points to 16.8%. Official figures confirm how women are the hardest hit: in the first quarter of 2021, female unemployment reached 20.7%, almost 10 points more than for men.

"Everything has hit us hard here, the pandemic, the crisis and also the police," Johanna summarizes this multiple oppression. The Ombudsman's Office has already received 87 complaints of gender violence during the national strike, including 16 cases of sexual violence. The most shocking was that of a 17-year-old girl in Popayán who committed suicide after being sexually abused by four policemen.

The "Moms of the Frontline" act as defense and help to demolish the charade that it is "vandals" who are at the forefront of the protests. But they also assist in the logistics carrying water or sandwiches and interceding when a young person wants to go wrong; they know that any aggression against the police is used as a justification for further repression.

The reasons for continuing in the streets are as many as the outrages accumulated in so many years of this war of neoliberalism. Johanna sums up those of her battalion: “We joined the protests because we are tired of so much state repression, of our youth being killed. We take to the streets for the right to health, education, work, we are getting poorer and the only thing the government does is attack the people to defend the interests of some rich men. We go out to end the violence, so that our children will one day have a peaceful country. We went out to say 'no more'. We went out for the right to live.”

A lineage of mothers in struggle

The global history of dictatorships and infamous regimes has given birth to many experiences of organized mothers, guardians of memory and examples of universal courage. From the iconic Mothers of the Plaza de Mayo in Argentina, to the Saturday Mothers of Kurdistan, passing through the COMADRES in El Salvador. Stories of heroines created by the horror and pain of their missing daughters and sons.

In Colombia, state and parastatal terrorism occurred (occurs) without the need for a military government. The Attorney General's Office registers 84,330 adults and 9,964 missing children, more than the sum of all dictatorships in the Southern Cone. That is why the Mothers of Candelaria were formed in 1999. And a few years later the Mothers of Soacha and the Mothers of the False Positives, those young people murdered by the Army and presented as guerrillas killed in combat during the Álvaro Uribe government.

“We take as an example the pain of all the mothers of Colombia and the world who went out to fight because their children were taken from them. And here we say: we do not give birth to children for war. We went out to march because we did not bring sons and daughters into the world for the State to assassinate us,” explains Johanna. In doing so, they unintentionally weave a historic bridge of women who break into public space so that the world is a little more human.