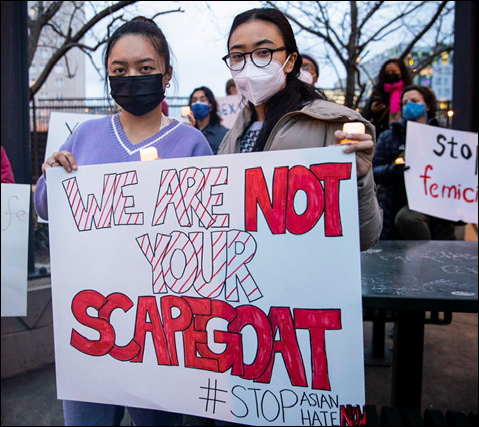 The March 16 murders at three massage spas near Atlanta and other rising attacks on Asians and AAPI women are a brutal reminder that the U.S. has a long, ugly history of anti-Asian atrocities. But we can fight these assaults through solidarity from other communities of color and whites, and with militant Asian American leadership.

What is needed is community self-defense. Each person must play a part by intervening, documenting, and educating. Unionized workers can apply lessons from strikes to build labor defense guards. Radicals are skilled at organizing community alliances. Lessons can be drawn from other defense efforts of the Black Panther Party, Deacons for Defense, and Q Patrol.

What is behind the escalating assaults? Trump’s “China virus” rhetoric fanned the flames of bigotry, but the violence did not start with him. And it won’t be ended by Biden, whose administration on March 15 deported 33 Vietnamese immigrants. It started in the mid-1800s when Chinese, then Japanese, Korean, and Filipino laborers were first recruited to toil in U.S. fields, canneries and railroads. Rights and citizenship were denied through laws such as the Chinese Exclusion Act. White mobs attacked Asians throughout the West Coast.

Anti-Asian racism has its origins in the profit system in much the same way as the enslavement of Blacks and the genocide of Native Americans fueled capitalist development.

Misogyny, racism, white supremacy, homophobia and transphobia are offshoots of a system that reaps wealth through exploitation and discrimination.

The powers-that-be employ scapegoating to divide workers and put the blame for systemic crisis on oppressed groups, instead of on the profiteers. Anti-Asian stereotypes such as “model minority,” “foreigner,” “economic competitor” and “military enemy” pit racial groups against each other and promote nationalism. Sexist targeting of Asian women as “exotic” or “docile domestics” is also used to dehumanize and “explain” violence against them.

Fighting back! Asians and Pacific Islanders in the U.S. have a legacy of movement struggles aimed at the system. In 1867, Chinese railroad workers struck for better pay in California. In the 1930s, Filipinos organized across different ethnic groups to form labor unions in Alaskan canneries.

Since the 1960s, Asian American feminists have been battling sexism in their communities and around issues like domestic violence, reproductive justice, and LGBTQ+ rights. Because of their experience with multiple oppressions, working-class Asian American women and LGBTQ+ people have the power to connect social movements and forge a radical multiracial assault on bigotry. The community needs Asian American leaders who are not tied to the pro-capitalist, go-slow Democrats or rightwing Republicans.

We need a vibrant, multi-hued working-class movement to replace capitalism with socialism in order to permanently end racism and white supremacy, sexism, queer and trans oppression, xenophobia, and class exploitation.

Let’s act now to:
-- Build community self-defense. Everyone has a responsibility to intervene, just    as when we see a cop committing brutality.
-- Oppose increased policing, which adds to repression of all communities of    color. Call for elected civilian review boards and independent prosecutors to    establish community control and accountability of the police.
-- Prosecute anti-Asian attacks as hate crimes.
-- Demand rights for all immigrants. End deportations, shut down ICE and    detention centers, and open the borders.
-- Win equal pay and safe working conditions for women. Unionize immigrant    workforces and build a fighting, democratic multiracial union movement!