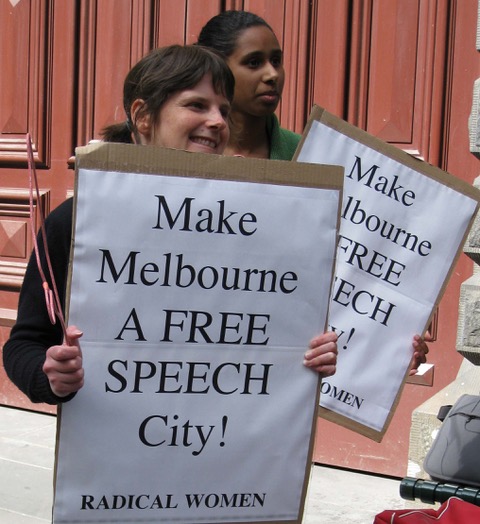 Radical Women and Freedom Socialist Party stand with the refugee rights activists being harassed by Melbourne City Council (MCC) and Victoria Police on spurious grounds of a bylaws breach. The action by MCC not only lays bare its hypocrisy of claiming to be a Refugee Welcome Zone. It continues MCC’s notorious record of repressing political expression and organising in its streets, going at least as far back as the anti-Vietnam war protests.

In 2010, defenders of the Fertility Control Clinic in East Melbourne faced identical harassment. When Radical Women (RW) and other clinic defenders called the Council’s bluff on the alleged breach of a “noise” bylaw, it issued a Notice to Comply and the threat of a $1,200 fine for tying a banner between a pole and a tree. With the support of Fitzroy Legal Service, RW fought it. A highly successful public media and petition campaign forced the Council to withdraw its notice. And the clinic defence continued. Soon after, MCC used the same tactic against the Occupy movement — this time with the full force of Victoria Police. Now the Council and Victoria Police are setting upon a growing movement to free refugees.

These assaults by state powers are global, and they are escalating. For each effective mobilising they try to quash, the actual target is our rights to free speech and protest — making resistance against any assault the responsibility of every movement.

We can defeat MCC and Victoria Police if we come together as a united front and organise around agreed principles of unity. The union movement is especially critical. Here workers, in all our diversity, are organised, and this is our greatest power.

It is also vital that everyone and every movement support this petition demanding Melbourne City Council to stop using bylaws to silence protest: https://policeaccountability.good.do/dontsilenceprotests/action/

A victory over Melbourne City Council would be a milestone toward achieving the unity we need for facing all the struggles that lie ahead.