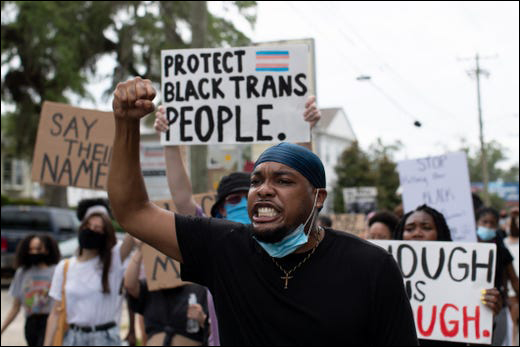 It is no accident that longstanding police brutality was the spark for the modern gay liberation movement, ushered in by the 1969 Stonewall Inn rebellion in New York City. And it is also no accident that queer and trans folks of color were the angry, fabulous warriors who, risking everything, played the leading roles.

That uprising helped to galvanize LGBTQ+ people into action internationally. Now, 50 years later — on the anniversary of the first Gay Pride marches —the U.S. is in the middle of a mass uprising for Black lives ignited by the police murders of George Floyd, Breonna Taylor, and so many others. This revolt is inspiring the world with its uncompromising passion for justice. And it is the reason why many Pride events around the country are dedicated to the cause of Black liberation.

A profound connection The 1970s-era chant “Gay/straight, Black/white, same struggle, same fight” expressed the organic connection between racism and homophobia. The profit system we live under survives by oppressing and super-exploiting special groups of people, who together make up the majority. And how do they maintain that dehumanizing class rule? That is the essential function of the police.

Tony McDade embodied Black/queer commonality in his own person. McDade is a Black transgender man who was shot and killed by a cop in Tallahassee, Fla., on May 27, two days after Floyd’s murder in Minneapolis. The city police department and the police association are hiding the identity of the officer who killed McDade behind a law designed to protect the victims of crimes.

Amid what the American Medical Association calls an epidemic of murders of transgender people, the overwhelming majority of those who die are trans women of color. But Black trans people who are the targets of this violence are much more than victims. Along with Black women — cisgender and trans, queer and straight — they bring militancy, strength, and leadership to the fight for all-encompassing equality. They have the greatest motivation and drive for change.

Fight for all with a multiracial united front What oppressed people have to rely on is our united power, not the Democrats or Republicans or Supreme Court. The need is urgent for a radical, multiracial, feminist, working-class united front to fight for both Black and queer liberation. This could save many lives, including the lives of brown and Native people who also disproportionately suffer violence at the hands of the cops.

Ultimately, full liberation can only be won through socialist revolution, by removing the capitalist incentive for bigotry and clearing the way for a flowering of human potential.

The importance of what U.S. champions of liberty and justice do cannot be overstated, not only for this country but for the rest of the world. We have the power if only we will take it! Together, we can change history.