Organising against the far right is gearing up in Melbourne. At the first counteraction, unionists joined Radical Women and Freedom Socialist Party in a tightly disciplined contingent protecting everyone’s safety. We’ll do this again at the next rally on 4 December.

A united front of all movements and communities targeted by the über-right can defeat these shadowy forces that are driving the violent anti-vax, anti-union resistance. Unions are essential for building our united power. If you think so, too, and would like to carry a placard with this message, we’ll have one for you. Or bring your own!

To join the contingent on 4 December, contact rw.aus@radicalwomen.org for details.

Join the petition stall in Brunswick 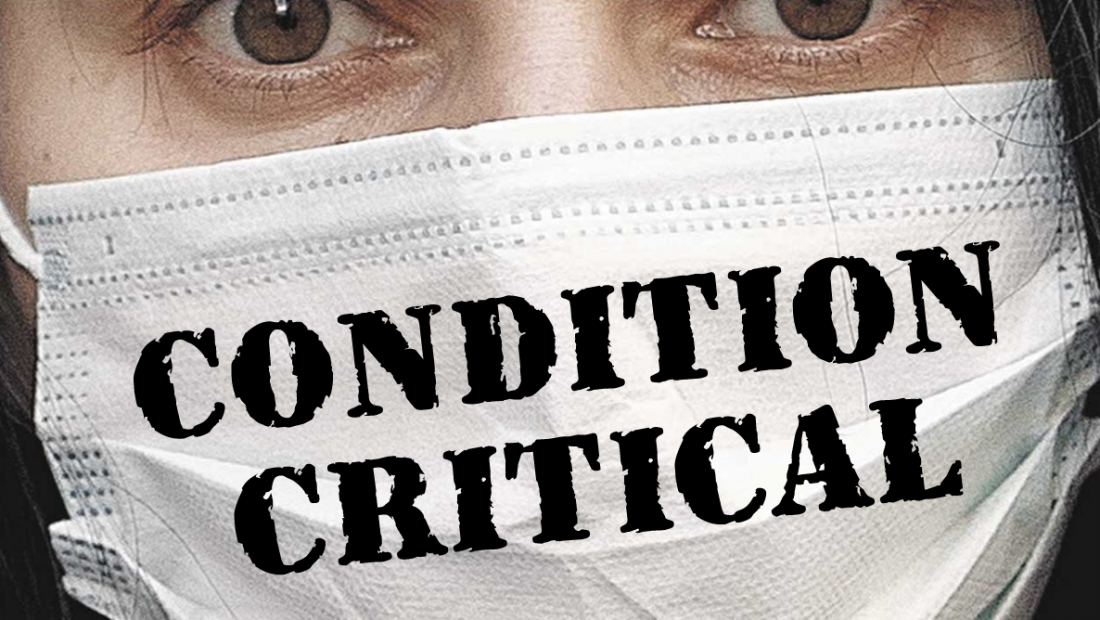 Radical Women will send this petition to National Cabinet and federal, state and territory governments in December. Join campaigners, who will take the petition into the community, talk with people about its very do-able solutions and collect more signatures.

The stall will be outside the Brunswick Mechanics Institute, corner of Sydney & Glenlyon Roads, Brunswick. 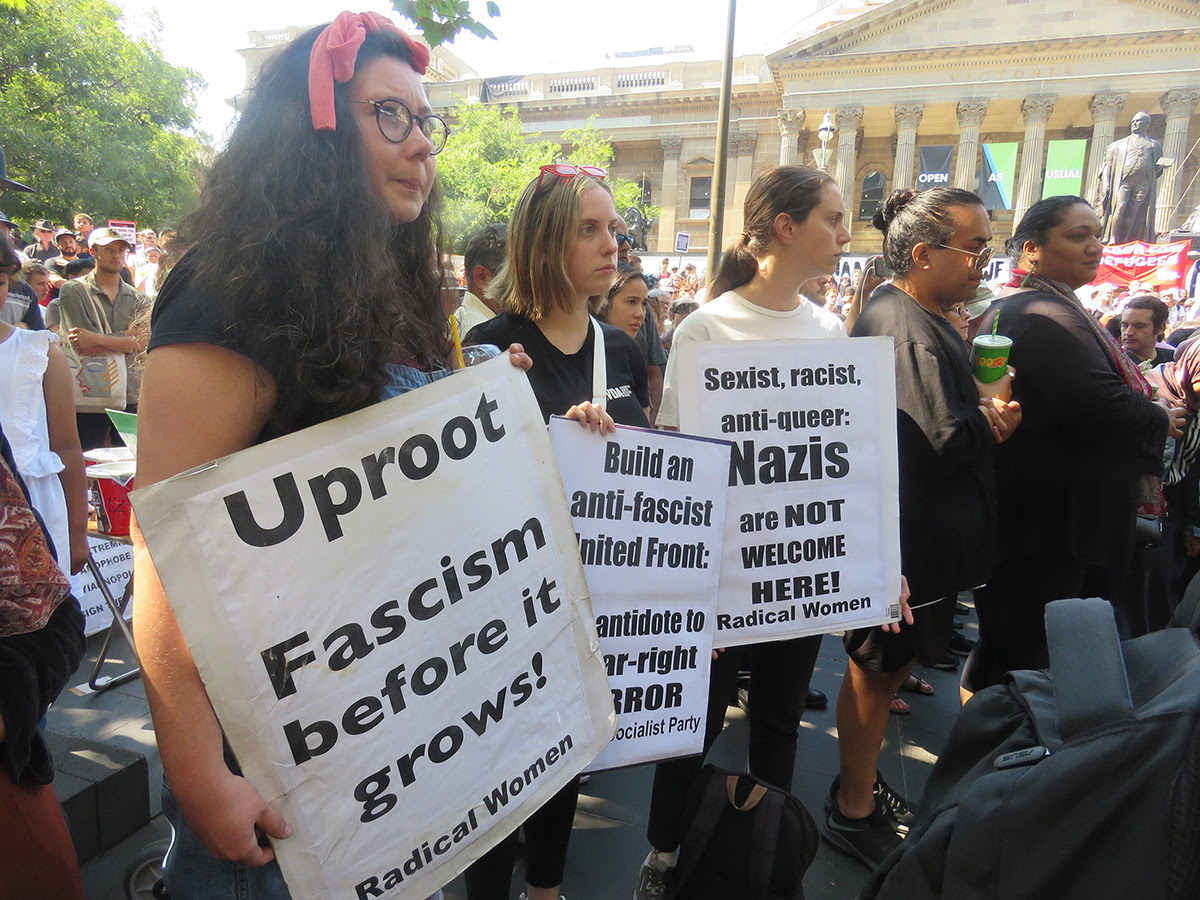 Although a tiny minority, a far-right movement is organising and recruiting in Victoria and across the country as well as internationally, feeding on working people’s genuine fears and desperation. This is how fascism grows. Small as it is, this fledgling movement has to be stopped by grassroots mobilising before it’s too late.

Its next “freedom protest” in Melbourne is Saturday, 20 November. Radical Women and Freedom Socialist Party will participate in an organised counter-protest, going as a tightly disciplined contingent to protect everyone’s safety. If you’d like to join us, contact rw.aus@radicalwomen.org for details.


Fire up to beat the "Religious Freedom" Bill, inspired by global fights for reproductive justice 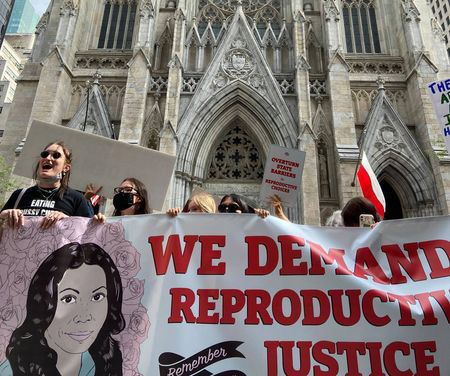 The far right is closing in on abortion rights. In the U.S., a 1973 Supreme Court decision, which legalised abortion nationwide, could soon be overturned by the same, now conservative-stacked court. In Australia, a federal “religious freedom” bill would seriously undermine women’s reproductive choices, as well as legitimise discrimination against minority groups.

This gathering features a video from a recent forum, hosted by Radical Women U.S., where international speakers told how women in Ireland and Argentina won legal abortion and connected these inspirational examples to the fight in the United States. On October 3, a massive grassroots mobilisation, initiated by Radical Women and endorsed by union, feminist and socialist organisations, took place across the U.S. This date commemorates the death of Rosie Jimenez in 1977, the first woman to die after the government withdrew federal funding for abortions.

Join us in taking lessons and inspiration from these international warriors. Come away energised, uplifted and galvanised to action for reproductive rights in Australia.

Get inspired by photos, videos and press coverage of rallies across the country — from New York City to Los Angeles — on the Radical Women U.S. facebook page.

Shocking daily infection rates, especially in Victoria and New South Wales, are not slowing governments’ race to re-open business. This is despite the warning by NSW scientist group, OzSage — now echoed by frontline states — that to reopen at 80% would overwhelm the intensive care units of already exhausted hospital systems. People’s safety trails behind profit in this race.

The Radical Women-initiated online petition, Winning the vaccination race means putting the needs of people before profits, had a lively launch in September. Its demands on federal, state and territory governments to start implementing real and far-reaching solutions for everyone’s health and safety are gaining traction.

Join others in working to redirect this race and put people at the front, with coordinated, global vaccination as the goal. Help work out strategies to get even more signatures from far and wide — in our workplaces and unions, communities and networks — and galvanise people around these ideas. Bring your creativity and energy!

Register for the organising get-together here.

The race to vaccinate has finally begun. But only after the Delta variant bolted. With infections and deaths rising, federal and state governments are using inadequate vaccination targets to justify the reopening of business — and pitting vaccinated against unvaccinated to achieve this. The New South Wales scientist group, OzSage, is warning that to reopen at 80% would overwhelm the state’s intensive care units. People’s safety trails behind profit in this race.

Come and be part of its launch! Join others ready to redirect this race and put people at the front, with coordinated, global vaccination as the goal. Help work out strategies to get signatures far and wide — in our workplaces and unions, communities and networks — and galvanise people around these ideas. Bring your creativity and energy!

Register for the launch here.


Patriarchy: Where it came from and how to smash it 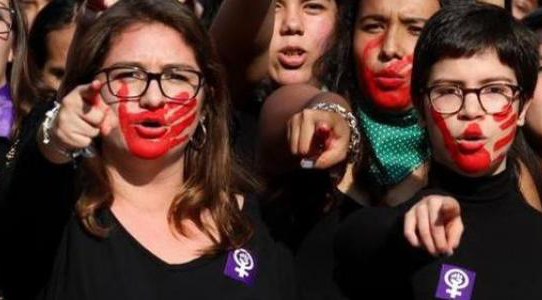 A MeToo movement has re-erupted in Australia, and a women’s uprising is sweeping the globe. Radical Women is hosting this online study circle to explore both the crisis underpinning these exciting events and the opportunity for building a united and powerful feminist offensive. We’ll delve into critical questions, like: How did society, once egalitarian under women’s leadership, get so warped? What does it take to turn our rage into a revolution, bringing in a new world that frees everyone?

Join from anywhere in Australia by registering via the session links on facebook. All genders welcome!

Email radicalwomen@optusnet.com.au or phone 03-9388-0062 for a study guide or more information. 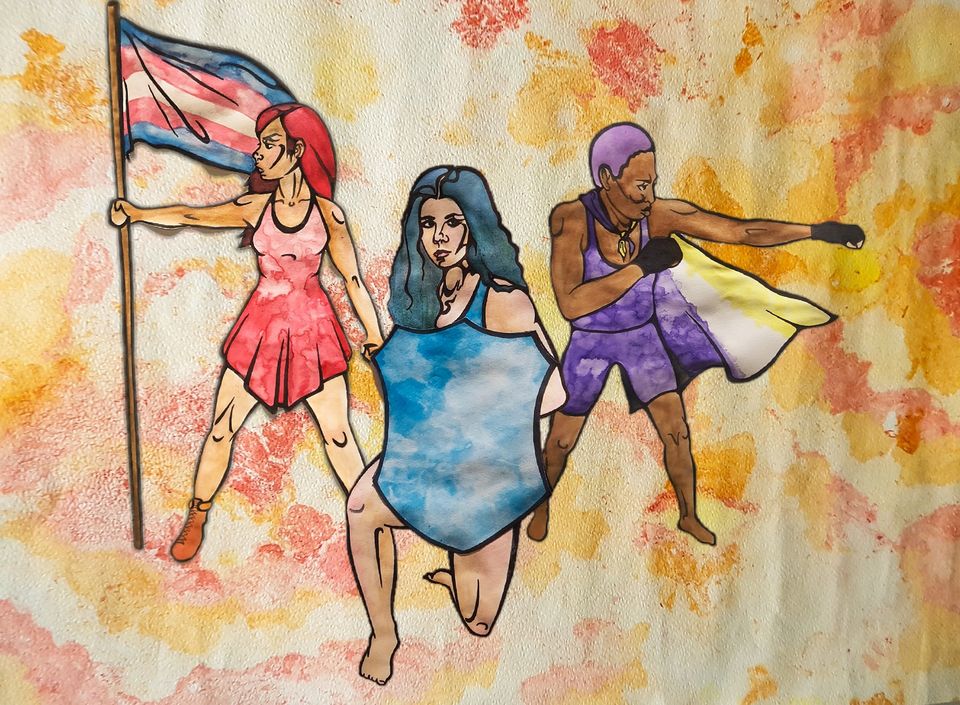 Veteran LGBTIQA+ liberationist Alison Thorne will discuss the shared roots of oppression between cis and trans women and all queers at this special Stonewall celebration. Thorne is a trade unionist and founding member of the Melbourne chapter of Radical Women. She’s been arguing for decades that feminism must be inclusive of transgender sisters.

Radical Women and Rainbow Atheists will co-host this discussion, paying tribute to the leadership of trans women of colour and working-class non-binary folks in the 1969 Stonewall riots. Declaring “Enough!” to police harassment, these protests laid fertile ground for a radical liberation movement set on dismantling compulsory heterosexuality, busting the gender binary and winning liberation for all.


For a union & unemployed fightback:
Lessons from the 1930s Depression 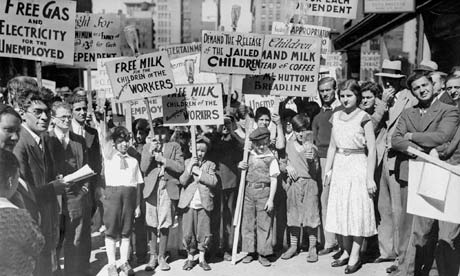 As the line between working and being jobless disintegrates, workers’ sense of common cause is growing, with low-paid women and immigrants in the lead. In this worst economic crisis since the Great Depression, we can learn from unemployed workers’ organising alongside unionists in the 1930s. An international demand from the Depression, revived by WOW!, was for a shorter working week with no reduction in pay (“Thirty hours’ work for forty hours’ pay”). This measure would not only reduce unemployment, but would be a lifesaver to women suffering a triple workday due to mounting family duties during COVID.

This meeting will discuss the 1930s unemployed movement in Australia. We’ll explore demands for today, which can bring together workers of all genders — both in and out of work — as a fighting force against the profiteers.

To join in this online discussion, register here.


A Woman’s Place is in the Revolution! 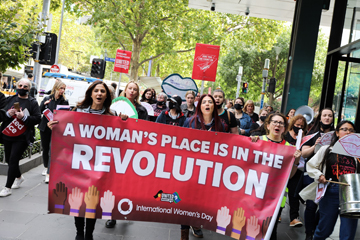 Working women have been hit especially hard by capitalism and its pandemic. So on May Day, we've got something to say! Celebrate this international workers' day by marching behind the United Workers Union banner, "A Woman's Place is in the Revolution!" Radical Women will be there with other unionists from across the movement. Come along and be part of this powerful May Day statement!


To end violence against women,
pinpoint its source and destroy it! 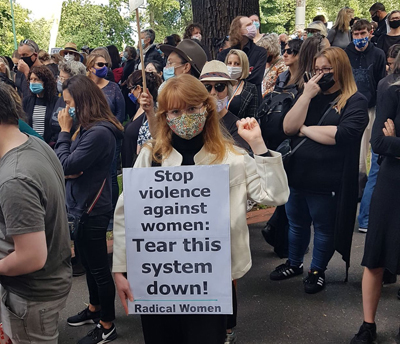 First Nations women locked up and killed; trans women murdered; queer women demonised; birthing women abused; immigrant women assaulted; women stalked and raped; no woman considered a person in her own right. This Radical Women gathering will explore the cause of such thoroughly misogynist violence. When we know the source, we can organise a movement to eradicate it. All genders are welcome!


It’s time for a grassroots fightback 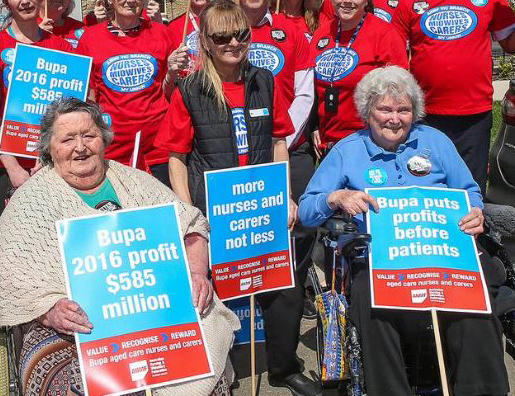 First it was childcare, then JobSeeker and now aged care. COVID has exposed how this economy serves only the corporate rich — the rest of us be damned.

Coming out of brainstorms by working women on what to do, WOW! anticipated these “revelations” with demands for organising in our diverse workplaces and communities.

This WOW! meeting will discuss how to apply the demands to these unfolding crises and direct them toward unifying, grassroots action. Bring your thoughts and experience to this discussion, and let’s start building a fightback.

WOW! is a campaign initiated by Radical Women. For more info about WOW! or this meeting, go to www.facebook.com/workersorganisingtowin or email womenworkers.wow@gmail.com


Rally for Justice and a Fair Go for Refugees 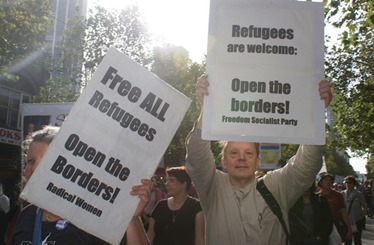 Radical Women and Freedom Socialist Party are among many community endorsers of the annual Palm Sunday refugee rights rally. If you’d like to march with us, please get in touch.

This year, the Rally for Justice and a Fair Go for Refugees is demanding:
• Permanent visas and family reunion for all refugees
• Fair and timely assessment of all claims for refugee status
• Safety net income for all those who are waiting for a permanent visa, if they cannot find enough work to support themselves
• Releasing ALL refugees from detention
• Bringing 260 people still held on Nauru and in PNG here, or allowing New Zealand to resettle them.

We support these demands and also advocate that the movement address the issues that lead people to flee their homes — imperialist rivalry, national oppression, climate change, war and global inequality. All are exacerbated by sexism, racism and homophobia. We call for open borders: Capital can move freely round the globe. People must have this right, too!

Email radicalwomen@optusnet.com.au to join the contingent.

(Photo is from the 2014 Palm Sunday Walk for Justice for Refugees, Freedom Socialist Organiser archives)


Women Rise Up Globally Against Femicide 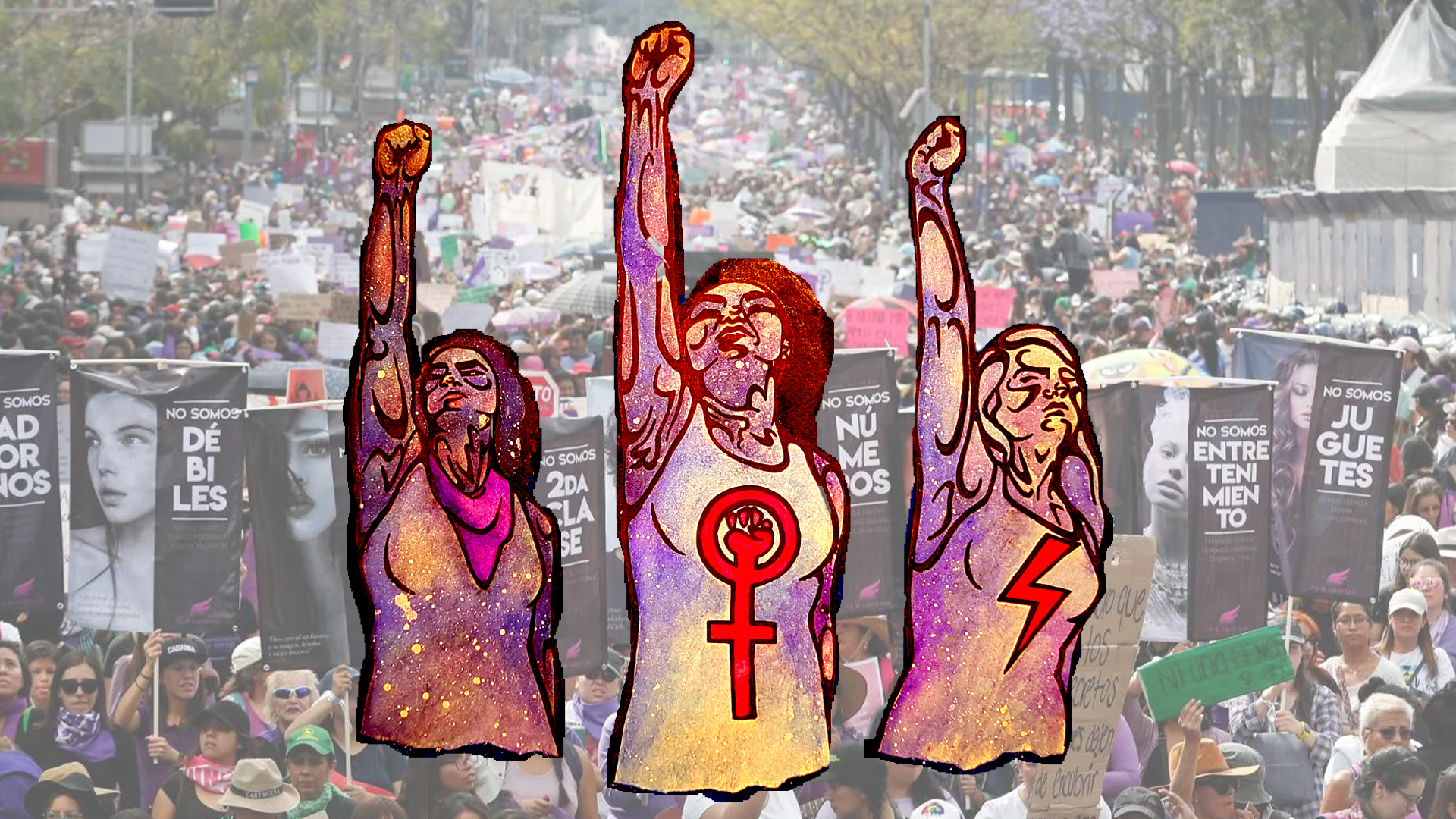 This international celebration of the socialist-inspired day to honour working women will bring together feminists of different nations and regions to discuss the massive cross-border upsurge in defence of women’s lives and address how to stop the epidemic of violence against women.

Register in advance at http://bit.ly/IWD-RW 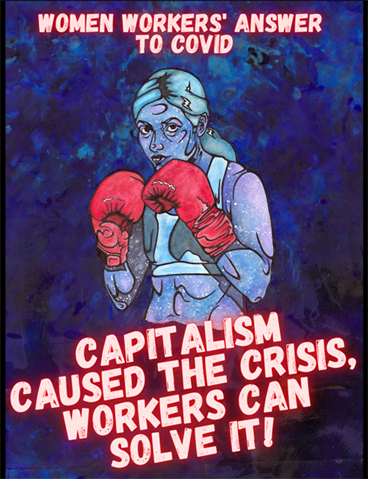 During Victoria's lockdown, women working in hard-hit industries came together to brainstorm what to do. These informal zoom gatherings resulted in a statement — “Women workers’ answer to COVID: Capitalism caused the crisis, workers can solve it!” — with winning demands that put control into workers’ hands.

Come to WOW!’s first meeting, and let’s start strategising for taking these demands into our unions, workplaces and communities. Bring your ideas, skills and know-how. All genders are welcome!

Check out the statement with demands